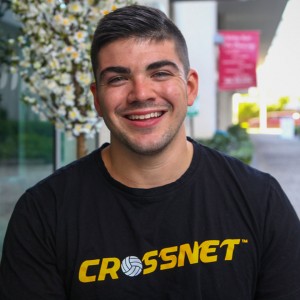 Episode 90 of the Just Get Started Podcast features the Co-Founder and Chief Revenue Officer of CROSSNET, Chris Meade.

Chris Meade is the Co-founder of CROSSNET, the world’s first four-way volleyball game. Now sold on Target, Walmart, Amazon, and 20+ marketplaces CROSSNET is becoming a household name in the outdoor sporting goods market. In 2019, CROSSNET surpassed 2.25 million dollars in sales.

It’s not every day that a new sport is created – but that’s exactly what happened when three friends from a small town in Connecticut combined an old game called four square and volleyball. Growing up together in the “Quiet Corner” of CT, brothers Greg and Chris Meade constantly sought new sports and activities to keep them busy with their childhood friend Mike Delpapa.

One night in May 2017, Chris, now 26, got together with his brother, Greg, 25, and Mike, 25, got to reunite. Reminiscing on recess days playing four square, the three friends struck an idea for a four-way volleyball game that merged traditional volleyball with the four square. By dividing the court into four quadrants, rather than in half, they envisioned a new game that incorporated the nostalgic feel of recess. After creating a prototype, inviting their friends to come play and not being able to turn them away they knew we were onto something!

Since that moment over 2 years ago, the trio has made it their mission to spread the game of CROSSNET throughout the world.

If you enjoyed this interview you may also like my Just Get Started Podcast Interview with Justin Lafazan, Co-Founder of NextGen